Why is it I always think of a great title after I have finished my layout and called it something else??? I was having a play with my Cameo and cut this great Merry-Go-Round horse and knew straight away that I wanted to use it with these photos....but instead of using the cutout and sticking it on to the layout I actually the outside of it for a mask with some Gesso. So now I still have the cutout piece to use!!! I took a few photos while I was doing the background so I will upload them shortly in a Six Simple Steps lesson (when I get a few moments to myself). So busy at this time of the year. 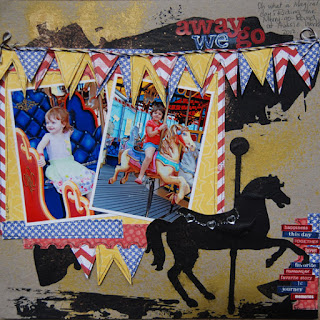 The photos in the layout where taken at Aussie World in Queensland, the Merry-Go-Round must have been the girls favourite ride. The went on it about six times throughout the day. Paige wasn't game enough to get on a horse by herself, but she did love the Princess carriage.