I wasn't sure if I would get any more scrapping done for a little while, as I finally had my foot operated on and I wasn't too sure how mobile I would be. With the help of a hired wheel chair and Adrian here I have been able to get around, but the goal is to stay off my foot. Hopefully the operation has worked and in the near future I will be active again.

Anyway enough about that - I managed to get two layouts done for the March Mystical Scrapbook Harmony Day Cybercrop. Here they are;

Donna'a challenge - was to use non English words on you layout.

The Affection Between Sisters

SORRY I AM OUT FOR PUBLICATION

be right back after I appear in

I raided my scraps for this layout - as I my trying to use just my Counterfeit Kit this month I wanted to start there - so I pulled the vellum from that kit and was inspired by the vellum pie chart ....however that is where I stopped using my kit. The photo did not go with any of the colours that are in the kit so I headed to my scrap pile. It took me a little whole to work out the title - Donna you had me stumped. I originally wanted Sisterly Hugs, but my translator wouldn't translate that for me...so I ended up with The Affection of Sisters instead, which is kind of nice. It sounds nicer in French!!

Kathy's challenge - was to use orange on your layout, which this month is easy for me as I have a heap of it in my Counterfeit Kit.

Valley of the Giants 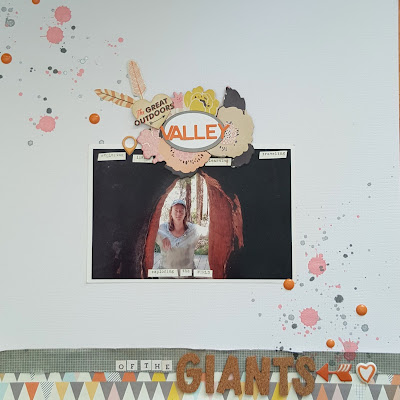 Now the challenge was to use orange - there is orange here...although in the photo of the layout it actually looks peachy/pink....but I assure you it is orange. The ink splotches, the word Valley, the feathers, the enamel dots and the triangle in the patterned paper are all orange. I have used my Counterfeit Kit on this layout and just added a strip of scrap patterned paper along the bottom of the page, everything else is from the kit.
Posted by Tracey at 11:10 am

Two fabulous pages - what a brilliant challenge to use a foreign title - inspired!

These are awesome! I love how they turned out.

Love that 'starburst' style layout inspired by the vellum and acetates from the CKC inspiration kit! It's a beauty - and any stash that's used up (even if it's not from your kit) is a win, right? x

Two fabulous layouts, in slightly varied styles - love how the splatters work so well on both.