Eat it!!!
We had an early Easter this year as my Mum (Grammy) came over for the month of February to get to know Bronte. Both Bronte and Grammy had a ball and really loved each other from the very first day.
This page is of Bronte and her reation to being given her very first Easter Egg. I just love the look on her face when she realised what to do with it. 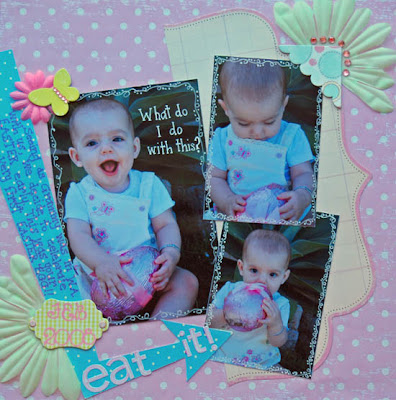 A tissue, a tissue we all fall down
Another page for Bronte's songs album. This layout is about the mischief that Bronte can get into all by herself. We know she is up to somehting when it all goes quiet. I grab the camera and go looking for what she is doing .... just to get some evidence.

Bronte loves being ouside just watching everything happen around her. These photos where taken when we went down south to Karri Valley Resort, Pemberton in January. On the moring we where leaving to come home Bronte just sat by the lake watching the ducks and the butterflies. It was lovely.

Little Peta Rabbit has a fly upon her nose

Another songs layout. The rabbit is a present from Grammy and Bronte loves to cuddle with it on the floor. We had to change the sex of Peta Rabbit when we sing it as Bronte has an Aunty called Peta so now the song is about her Aunty Peta!!